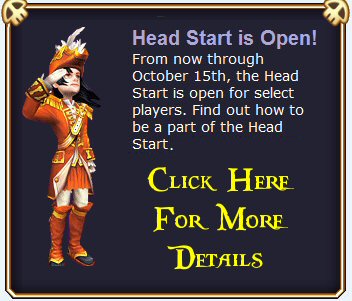 Enter The World Of The Pirate Spiral!

This morning at 9am central time, the head start version of Pirate101 rolled out to Beta testers, Boochbeard and Gandry bundlers.

Many fans were up exceptionally early hoping to be the first player to get into the official game. Even I was up at 6am eastern to discover if entry into the game was available. But alas it was not to be.

Fans made their way to Pirate101 Central and began sharing their excitement and anticipation of roll out. Each half hour counting down the moments to see if now might be the time to gain entry.

Rumors flew, it’s going to be released at 9 no 10, no not till 1:01pm. The Pirate Twitter accounts said this, no the Facebook page said this, the magazines said that. But all the rumors were unfounded as the hard working techs at KI rushed around and crossed their fingers as the final details were implemented and the servers were opened to the public

We rushed in and created our own new Pirates Of The Spiral!! We’re still putting the final touches on their persona and managing their backpacks as the gifts from KI are rolled out and presented to fans. We’re most excited about the Beta Test reward: the Pioneer Eye Patch!

So come along and join the fun! It’s clearly going to be a jammed packed day in the Spiral. But the more the merrier matey! Now let’s get back to the game!