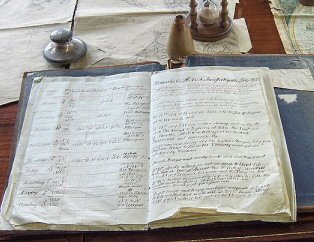 Keeping Track Of Your Journey

A chip log, also called common log, or just the log, is a navigation tool used by mariners to estimate the speed of a vessel through water. The name of the unit knot, for nautical mile per hour, was derived from this method of measurement. This measurement is used to determine the distance a ship traveled within a certain amount of time. The readings of the log have been recorded in equal times to give the distance traveled with respect to a given start position.

A Ship’s Log, Captains Log or the Logbook was originally a book for recording significant events or readings from the chip log, and happenings on the ship itself.

Historically a ship’s log might list passengers and cargo as well as, position, weather and events of the ship and its crew. They might include repairs to the ship, issues with cargo, deaths, births and so on about the people on board the ship.

Today one of the most infamous Captain’s Logs aren’t even real, but rather come from the sci-fi series Star Trek. Many episodes begin with “Captain’s Log, Star Date” whatever the date is. And the Captain of the Enterprise relates some issue or event that the ship and her crew are about to undertake.

Here in the Spiral, the Captain’s Log comes from our favorite character One-Eyed Jack. Jack shares a plethora of information about the status of the game, updates, news and more. It pays to keep up with Jack and the news within the Spiral. 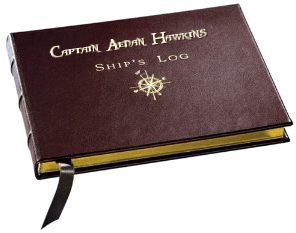 Typically the ship’s date is based on the year, month and day the entry is made. The format can vary, but typically its structured as the yearmonth.day.

Today our culture has gotten used to those USS Enterprise star dates from Captain Kirk and Captain Picard.  Which have gone through an evolution of formatting and is somewhat confusing unless you learn about its history and their progression through the generations of space travel.

Within the Spiral, One-Eyed Jack says “The Spiral Dates are just one of those strange mysteries of The Spiral”. His dates probably relate to an internal code that only pirates of KingsIsle understand. But consider the format of one of their early entries: Spiral Date 416552

I’m an old sailor, and I remember when we humans were promised flying cars by the year 2000. And interstellar travel would be possible by 2010. I want my flying car! Well today we at least have our flying ships that can sail through the skyways in the Pirate Spiral.

Taking into account the centuries of technological evolution to create a flying clipper ship, I’ve put the Spiral date to the year 4165. Based on this idea, the Captain’s Logs here on the Portal reflect that year of the Spiral, followed by the month, with a dot “.”, separating the yearmonth and day. For instance Captain Victoria Bristol made her first Captain’s log entry on 416510.13 = October 13th, 4165.

And there you have the history and story behind the Captains Log and the date of the Pirate Spiral.