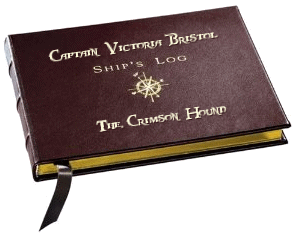 It’s been a month since we last reported our progress. A lot has occurred since that last entry. We have ventured through The Stormgate To Valencia. Met up with some interesting unicorn folk there. But we made it back to Skull Island.

We ventured through a new storm gate to Cool Ranch and picked up the Bird Flu. That knocked us all out for a little over a week on all its own.

We also took on some new crew members, picked up a new ship and a fair bit of skill. It’s been a month of turmoil and adventure for sure! 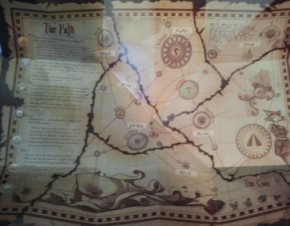 The first mission in our quest to Valencia was to recover Marco Pollo’s map from the Armada. It’s been a tough road as the map has been torn to pieces and scattered through the spiral.

We had to do quite a bit of running around simply to find the crystal that would provide passage to Valencia. Once again that took us on an adventure to meet up with our old friend Fin Diseal. Can you believe he’s still in cahoots with the Armada? What’s he thinking?! They’re bound to kill him for sure once they have what they want. But as usual he won’t listen.

Before we left on our trip, Sarah Steele had an opportunity to advance her skills as a fencer. We spent a little time with Morgan Lafitte on Skull Island where she put Sarah through her paces. A few tests and instructions later and we were off to find a fine blade that had been passed down through her family for many generations.

At last report, the blade was in the hands of her Uncle Remington who resides in Flotsam. Unfortunately he had lost it to a Bilge Rat pirate named Mick Dagger. Thankfully for us One-Eyed Jack knew where we could find him. So we headed off to Scrimshaw to get the family sword back. And we did! Our little Sarah is growing up before our very eyes! 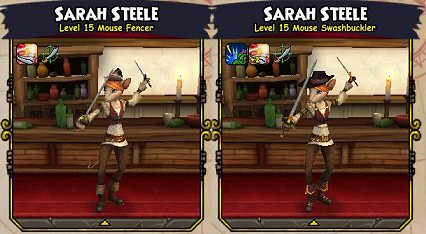 On To Valencia
Back to our mission and finding the map. Even with that crystal in hand, we had to venture through the hot fiery world of Dragonspyre to get to Valencia. But thanks to our friends in Puerto Mico, we had a nice pretty ship to make the journey in. The Santa Sophia was nice enough. Smelled a bit like old bananas half the time though.

The Santa Sophia ~ A Light Skiff

Thankfully we made it through the storm gates and arrived safely in the Aragon Skyway! Boy is it treacherous there. The Armada is everywhere and ready to blast anyone out of the sky. We met up with a retired Sky Captain named Steed.  He is no friend of the Armada, thank goodness. With his help we managed to gather clues and information about the Armada’s plan and their piece of the map.

Sadly, we didn’t recover the map and we left Valencia no better than we found it. It’s so very sad seeing what the Armada is doing to that beautiful land of peaceful and intelligent Unicorns.

Before we left Valencia we picked up a new crew mate. Tall Nat Thatch, a Crab Hermit and another Witchdoctor. They really do come in handy in a fight.

Cool Ranch
From Valencia we traveled to Cool Ranch to find another piece of the Map. There are some really big open Skyways here in this spiral world. We entered through the storm gate and arrived in the Cooper’s Roost Skyway. Our first stop was ..Cooper’s Roost. There we seem to have picked up a flu from the range Birds there. It knocked the whole crew off our feet.

Turns out it wasn’t a bad bird flu and we have all pretty much recovered. A few coughs here and there still keep us awake at night. But for the most part the crew is back on their feet. Good think really, it was getting a little ripe below deck!

Thankfully we had completed a few missions before the bug hit us when we arrived. We meet up with a Nurse we rescued and transported her back to Cooper’s Roost and the Doctor there. We went on a mission for him and when we returned, she asked to come on board and be part of our crew. Nurse Quinn is another witchdoctor and she was very helpful in nursing us all back to health.

Back on our feet I picked up some new cloths to fit in around here. Wasn’t a bad outfit really, but I do miss my Pirate hats! I must say however the new swords are truly exquisite!  The hilts are intricately decorated with swirled carvings in gold and silver. Beautiful they are!

Before we got back aboard ship in Cooper’s Roost to return to the sky ways, we checked in on our correspondence at the Post Office. Pretty kewl too, we found a package from One-Eyed Jack! It’s always nice to hear from him and he does send us some great stuff from time to time!

It contained some new cloths, orders from Admiral Bundle in Marleybone for a new ship mate, Handsome Dan a Bull Dog Officer. A new sword that I can’t wait to try out. And he arranged for a new ship to be sailed here to Cool Ranch from Marleybone. A new ship. Arg Matey that’s always a good thing!!

Now to be honest, I’m not all that sure about these new cloths! They’re a little, well..they’re not really me. Too frilly and frufru for my tastes. And the hat is kind of heavy as it’s loaded down with gold bands and braids. When I came out of the cabin with all this on, Subodai nearly busted a gut laughing so hard.

They sure do have some magic powers to them though! Love that part at least. They have helped out in the fights we’ve been through today. So the laughing has ended because of that.

As for the Marleybone ship. She’s a fine vessel, personally selected by Admiral Bundle. She’s a Royal Navy Light Skiff named The Vigilant Beacon. And boy is she yar! She’s not as large as the Crimson Hound, our Galleon. But the Hound is in dry dock being scrubbed down and disinfected from that bird flu! So Beacon came at the perfect time to help us out! Not to mention it means we didn’t have to take out the Monquista Santa Sophia. I’m not sure we could stand the smell of those bananas in our recovering state!

That’s our news to date. Next time we’ll be reporting from the Valiant Beacon. Until then we’re traveling through Cool Ranch, so we’ll have more to report in our next log entry. Until then, may the wind be at your back and course ahead filled with clear blue skies!