It’s been a tough month here on my volcano island. The raft was nearly mortally wounded in battle and has been in dry dock for several weeks. Thanks to a family member who sent some gold our way for Yuletide, we’ve repaired our ship (ok, raft) and made our way back into the skyways! Yeah!!!

We had a grand time over the holidays. Temujin is from Mooshu and he’s never experienced a Yuletide Holiday  before. We were visited by some interesting merchants during the 12 Days of the Spiral. There were ship loads of new equipment, strange mounts and holiday surprises from the “over lords” of the Spiral World. Seems the royal house of this King’s Isle are very generous indeed!

We saw Fa-la-la-lama‘s, sampled some great Milk and Cookies, Holiday decorations, Yuletide Trees, Winter Trents and Mistle Toes, and so much more! Temujin and I even posed for a portrait on the front porch to commemorate the season! 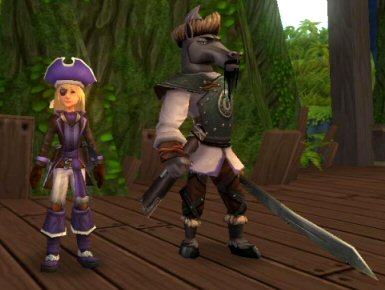 But enough of being land lovers and watching others sail the skyway. It’s finally time for us to put the raft back into the air and onto our own adventures and visitations through the Pirate Spiral!!

Ah its grand to be back in the skyways with the wind at our backs and salty air on our cheeks. We have truly missed the beauty that surrounds the windlanes, in all shapes and sizes. And truth be told, the crew was getting a bit punchy being land locked for so long as well.

No more did we get back to our mission of collecting spice for the Frogfather at the Presido in the Skull Island Skyway. Once again we ended up in battles with the Monquista Guards. Nasty little critters they are. Perhaps small in stature, they do possess a bit of a wallop behind their attacks.

It wasn’t hard getting into the Presido and we found the location of the spice right away. As usual grabbing and getting out of there was not that easy. With something so valuable it wasn’t simply going to be lying around waiting for pirates to grab it and run. The Monquista keep this stuff locked up tight. Thus we needed to search the barracks to discover a key. What we found instead was an old family friend who had been captured by the Monquista. Now we had two treasures to bring back to the Frogfather. Again, simply finding him wasn’t all there is to the quest.

Another set of Monquista guards defeated we headed upstairs to face the Captain of the Presido, El Nebuloso. Tough little guy he was. But without him, his guards quickly fled and we were able to grab his set of keys that provided the escape for Gaspard and access to the spices.

Once again, it wasn’t that easy. We released Gaspard well enough only to face another set of guards in the spice room. Thankfully we had Gaspard on our side this time and we dispatched the Monquista quick enough.

With spice in hand we rushed back to Jonahtown and delivered the goods to the Frogfather. Now HE owed us a favor, so where is Ratbeard hiding? These Frogioso have a code that requires an expert Conciliary to keep up with! Now it seems some guy named One-Eyed Jack owes the Frogfather a favor, and he transferred that favor to us and now Jacks favor owed to the Frogfather is owed to us. It’s enough to give a Pirate a headache.

The meeting wasn’t a total loss, Gaspard requested to become a member of the crew and it seems my parents had left a ship with the Frogfather some years ago and he handed her deed over to me. No more sailing on some little raft for this Pirate Witch! We have a real ship! Nothing like getting a ship in a bottle to put a smile on your face.

Not to mention the crew was terribly excited. We can let go of the embarrassment of that silly raft from Avery and have a fine sturdy skiff beneath our feet! Let me tell ya Matey..she is yar!

What is “Yar” you ask? What kind of Pirate are you?
Yar is an old English sailing term and it means a ship is easy to handle, quick to the helm, fast in the sails, and her hull is true and sound. Everything a boat should be, until she develops dry rot..which is the worst thing that can happen to any ship.

Anyway, my parents named her The Dashing Star and I can’t be more proud to be her Captain. Our sails sure do look grand filled with wind in her rigging! What a wonderful New Year’s gift this has turned out to be! 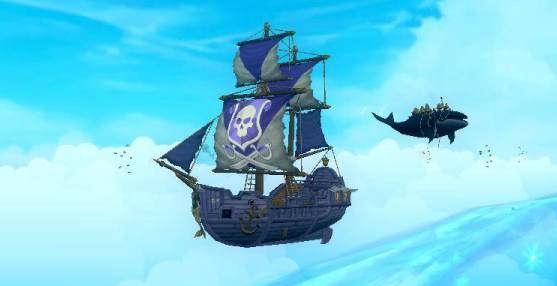 The crew and I are on our way to some new territory for us. It seems this One-Eyed Jack fellow is hold up in Flotsam. Sounds like an odd place; but we’re adventurous and excited to get there!