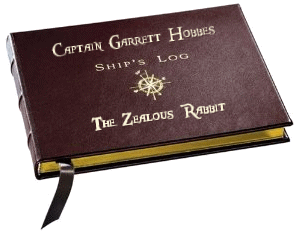 for this, the Sixth Day of January in the Four-Thousand-Sixty-Sixth Year of the Spiral

I had an interesting week, as Egg Shen would say. You know that old Mooshu curse? “May you have an interesting life.” To start off the day on the second, I was awakened from my comfortable sleep in my nice jail cell by a couple of officers. I’m not sure why they were looking for me. Had something to do with me being of the seed of my late parents. Oh well, I suppose the cannon shot dropping all around the fort would have woken me anyway.

Turns out that the cannon shot was precisely what they wanted me for. I met an unsavory sort name Captain Avery, who appears to be running the fort. He said I was just the man to stop the cannons the Troggies had turned on them. I read that as “expendable”.

So I figured that since returning to my nap was probably out of the question, my new first mate (by virtue of him being the only crewman I had) and I took off and made the Troggies much quieter. Since I don’t have a ship, I’m still not exactly clear on why I need a first mate. But since he’s good and smacking around frogs, I certainly don’t mind him hanging around. END_OF_DOCUMENT_TOKEN_TO_BE_REPLACED