We Had Extra Codes!

We had a little issue with one of our original game codes and contacted One-Eyed Jack to resolve the issue. Not only did Jack help us with the problem; he scavenged a couple of extra codes for us, in case it happened again! He’s so awesome!

We want to send out a BIG Thank You Jack! For your help and especially for your generosity! There’s a lot of our “A Pirate’s Portal”  fans who really appreciate it! Not to mention we LOVE these contests. This is only our 2nd give away; but it is so much fun for our entire family to be able to give away prizes to our visitors and other fans of Pirate101!!

We wanted to surprise some of our contestants who entered our Tribal Pack contest throughout the week by giving them one of these extra left over codes. We picked them at random, except one.

We decided to use one of those codes for a Day 4 entry we mentioned on our winners announcement. Our question that day was:
When you first enter the game and create your pirate character, What is the 1st thing Boochbeard says?

We posted an honorable mention to Captain James Derevaux; who gave us the most complete answer:
– “Get down, she’s gonna blow. *BOOM* *cough cough* it’s one of these prisoners *cough* check the ones down there monkey.”

We wanted to acknowledge the extra effort and awarded the first of the extra codes to him. Captain James received some great gifts from his Tribal pack: A Hunting Puma mount, a Scrimshaw Drake pet (named Coco), 3 companion training tombs and some cool stuff for his dorm room.

Our next Extra Tribal Pack Crew Winner from the week is….
Lainey – aka Reckless Scarlet Moone

And our last Tribal Pack Crew Winner Is…
Sam – aka  Silent Diego Everhart – (Another overseas winner! He’s from Australia!) 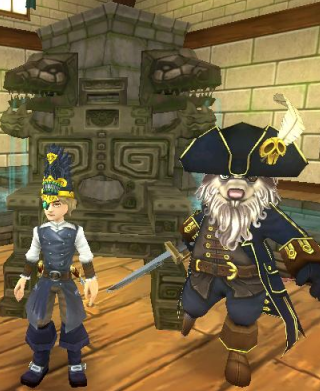 Congratulations to all our Tribal Pack Winners this week! We hope everyone had fun. Come back and visit us next time One-Eyed Jack scrounges up some new game codes for us to give away!