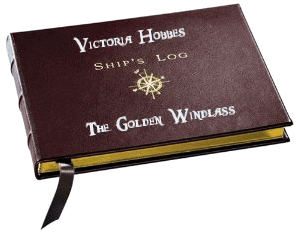 I never expected to be here piloting my own ship after leaving my family and friends in Grizzleheim. Who could have imagined this beautiful ship would be mine?!

I guess my Mom and Dad did, and that’s why they left it in the care of the Frogfather. In hopes that one day I’d return and claim it as my own.

So here I am, writing my first Captain’s Log and documenting the adventures of my ship and her crew. Point of fact this isn’t my first “ship”.  That would have been a small raft I picked up on Skull Island from Captain Avery. She was called The Soggy Eel. He thought giving her to me was a big joke, but I think the trick was on him.

She was a great little boat. Sturdy and strong! And with her my small crew and I took on Shark Pirates, Monquistans, Mousers, Batacuda and Flying Fish, as well as Rapa Nui ships too. We sailed to Blood Shoals, Jonah Town, Rapa Nui, The Presidio, and now we’re docked in Flotsam to find a guy named One-Eyed Jack.

But I’ve jumped ahead to the end of my story when I haven’t even told of the beginning. When I left Grizzleheim I was but a simple First Mate to Captain Bjorn Goldenblade. He was a nephew of the King, a proud member of the royal family and great trader of goods around the spiral.

When the Armada began its war on, well everyone, some members of the Royal Family used their influence and assets to help the Resistance. Captain Bjorn used his ship and business contacts to acquire weapons for the effort. Unfortunately we were discovered and the Armada put a contract out on Captain Bjorn, his ship and her crew. We never stood a chance.

Captain Bjorn was killed during the battle and our ship, The Grizzly Galleon was sinking as a few of us were captured by the Clockworks. Imprisoned I thought I was destined for torture as the Deacon would surely be looking for more information about Grizzleheim involvement. Thankfully our friends Captain Boochbeard and Mr. Gandry came to the rescue and managed to help me and another prisoner escape. Wing Chun a Crane Student was so grateful he asked to become my First Mate. I didn’t have the heart to tell him I wasn’t a Captain. So he’s been following me around through all my travels. 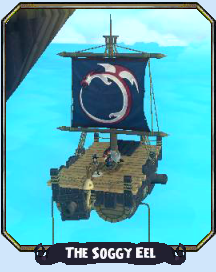 Boochbeard sent me to Captain Avery on Skull Island who was in need of some assistance to recover a stolen amulet. The task took us into the heart of Skull Island and the dark caves beneath the Skull head. We had to get past some Troggies and Cutthroats, but Wing and I had some help from our new friend Bonnie Anne. She is a Fox Sharpshooter and is amazingly good with that musket of hers. We found some lost friends of Captain Avery and located the necklace in the hands of a Cutthroat named Fin Dorsal.

For the effort Avery gave us the Soggy Eel and I became a Captain of my first boat. Thanks the great effort we put forth in finding Avery’s necklace he asked if we would help him find the map to Captain Gunn’s lost treasure. All he wanted from the treasure was some weird statue. Hey, for a promise of buried treasure it was a great adventure worth taking on.

We discovered that a vile pirate named Ratbeard had stolen the map and was heading out to find the treasure. He had double-crossed anyone who has aided him in his efforts. Which allowed us to pick up another new crew mate, Louis Le Bisque a Crab Harpooner. The question would be could we find Ratbeard and get the map before he found the treasure?

With our full crew ready to go we set off to Blood Shoals where we met up with some poor souls that had been killed by Captain Ratbeard. We took on some small favors to help them find peace and free their ghosts from the Shoals. From there we were sent to Jonah Town to meet with the Frogfather. With a quick stop at Skull Island.

Back on the Pirate Island we received word of a Springtime celebration. Packages were being sent to Captains from celebration Realms known as Fan Site. I have no idea what these places are, but they look pretty interesting. We received a package with a special gift inside. A happy little Blue Chocolope named Sugar! Oh she’s the most adorable thing I’ve ever seen!! And as Captain, of course I made her our ships mascot right away!! And my goodness she’s good in a fight too. Pretty powerful punches in those little antlers. Don’t let her cuddly nature fool you. 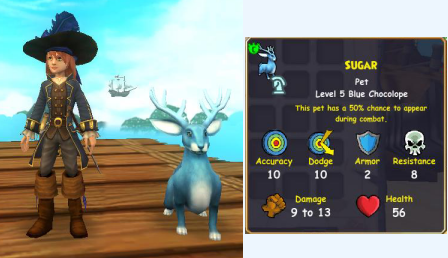 Now getting into see the Frogfather isn’t an easy thing to do. You evidently don’t merely walk into his town and plop down in a chair to have a chat. There are protocols, passwords and little tadpole type minions to deal with.

But first we had to get past Captain Ahab. It appears he lost his son and needed some help. I noticed a lot of people went missing in Jonah Town, Norville was only the first. Katherine Flay lost her first mate Terry lee to Mack the Shark too. But we rescued them all and finally paid our dues to see the Frogfather.

Now in order to get a favor from him, we had to do a favor FOR him. And that sent us to the Presideo, Presidio? Oh whatever! It sent us to this fortress where the Monkey Monquistans keep spice and we had to get that spice for the Frogfather. We went through a number of skirmishes, but handled them all well and with too much trouble. Thanks to my valiant crew! We also found an old family friend locked in one of their jails. At least he says he’s a family friend, I can’t say that I remember him.

The Crew of The Golden Windlass

Milo Graytail the Rat Brigand is his name and what a character he is. So we managed to defeat the Prisideo’s Captain of the Guard, steal his keys and release Milo. Who in turn helped us over come the guards and acquire the spice. It didn’t take long to sail back to Gullet where the Frogfather sort of went back on his word. He didn’t tell us where Ratbeard was, instead he transferred a favor owed to him, over to us. All we had to do was sail over to Flotsam and find this One-Eyed Jack.

For our trouble and with Milo’s endorsement, the Frogfather told us about a ship he had been keeping for my parents. Hearing they were gone and I’m all that’s left, he felt the right thing to do was to hand their ship over to me. I was pleased of course, but not sure what to expect. What kind of ship was it? What condition was she in? My crew and I have grown accustomed to our little raft, but we were also out growing it for comfort too.

Low and behold the Golden Windlass was in great shape. She needed a little paint and some new sails, but we took care of that right away. The crew and I have more room, bigger guns and some pretty fancy accessories thrown in to help us in a fight. She’s awfully yar! And I’m proud to Captain her with my gallant crew!

Now we’re off to Flotsam!