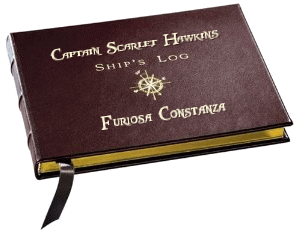 The crew and I have been traveling the Cool Ranch skyways for several weeks and there’s two things we have learned that are worth sharing.

First, there’s a specific order one should travel through the many towns and destinations. My sister in arms, Victoria Bristol, sent word that she tried to tackle one skyway before completing the one she was initially in and it was a disaster for her crew. It’s important to level up your skills and that of your crew and to complete as many of the quests in one skyway before heading off to another.

I hear A Pirate’s Portal has put a hold on updates to the Cool Ranch Quest Journal and have been preparing some rewrites. In the meantime, the crew and I have been battling through some tough battles through Big Sky and the other Skyways in Cool Ranch.

Cool Ranch is a really big place, full of interesting folk. We took on a great many chores for Sheriff Cogburn. Seems he lost a number of prisoners and his deputies appear to be fairly worthless. Cogburn was so impressed with us that after we captured his lost prisoners and tracked down some Wanted criminals he becomes part of our crew.

One of the most lovely sights was that of the Silver Stallion. What a beautiful ship she is. It also held one of our toughest battles. But with a little extra effort we dispatched English Bill’s minions over board and saved the Stallion from destruction. English Bill however, got away. I’m afraid we’ll run into him again soon enough. 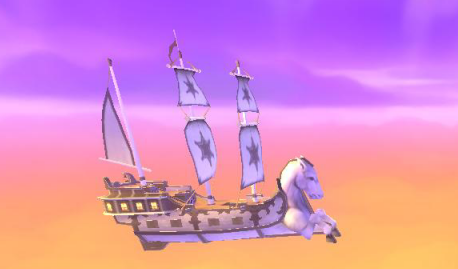 Big Sky Skyway was by far my favorite place to visit. The Bison Village is a kind and peaceful place. It was a great place to take a load off, do some repairs to the ship.

It also gave me time to find some new gear, accessories and cloths. I really like my new boots. They’re so girly and all.

It also held some tough battles as well. We had some pretty interesting ship to ship combat episodes near Scorpion Rock. But we managed to tough it out and get through that.

But I’m getting a head of myself. We arrived at Cool Ranch and meet some interesting folks in town. We helped out few wayward individuals and found our old friend Prospector Zeke who once again needed help with another  Zeke Quest, seems he’s tracking down Dixie Chicks this time.

We headed off to Arroyo Grande Skyway and took on some little tasks in Junction. We meet a good ole boy family, the Jolly’s. They’ve got themselves a tough life for sure. I’d rather be sailing up here in the skyways where the air is fresh and the breeze is always welcome!

One of the most interesting folks we came across was bull named El Toro! (Tada)..Once you meet him, you’ll understand the tada part. He’s a masked warrior, but the good kind. I think. We took on some tasks for the town folk in Santo Pollo, where El Toro’s (Tada) legend is infamous and seems to have originated. There we covered Bandito Trail, Froggo Villa Cave and Bandito Gulch. We battled some scorpions, Banditos and defeated El Guapo!

Our toughest battle was in Castillo Sapo, a fortress where we came up against the Frogerales and their commander Santa Rana. It was tough going there for a few moments when we realized Santa Rana was the key to the battle. Once he was out of the way, his henchmen fell like fried frogs.

Over in Big Sky we meet some pretty nice Bison who seem to be some of the most spiritual folk we’ve met on all our travels. Very connected to nature and spirit they are. Amazing peaceful energy they have around them and in their villages. We even took a tour of one of their Burial Grounds and helped put some uneasy spirits to rest. We were sent to rescue Nurse Quinn and came up against some tough Bison Warriors. But their counterparts, the Bison Shamans were no easy match. And then we faced the Pets of the Sacred Spirits, Jackalope Ghosts! That was an experience!

From the missions in Big Sky we were able to meet Sister Snake and Brother Wolf. There are two frightening spirits I wouldn’t want to make angry. We were sent to appease them and rebuild relations with the Bison. We did a lot of running back and forth between skyways. That can get a little tedious but it’s the nature of Cool Ranch.

Along the way the crew has grown both in experience and companionship! Old Scratch has risen to the rank of Undead Bokor. They are similar to the “root workers” of voodoun and it’s said Bokors have a great deal of magical power.  And Gaspard de Vole too increased his rank during our travel. He has been promoted to Guinea Pig Buccaneer.

The crew has also grown in number as well. 16 in all companions now fill the duties on the Furiosa Constanza. 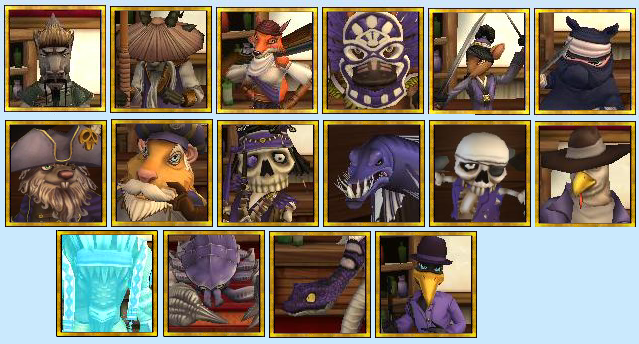 Our biggest task was to rescue Tonka and take on the Duck of Death..also known as English Bill. I knew we’d meet up with him again. This time however, we have the right weapons to defeat him. Though he tried once again to get away, this time, he didn’t succeed!

Now we’re trying to get information from Don Rodrigo’s father. Which isn’t too easy because he’s dead. Old Scratch is going to use his magic to summon his spirit, but we must first pick up a few items that belonged to the old Don in his mausoleum.

For now we end this entry. Until next time.