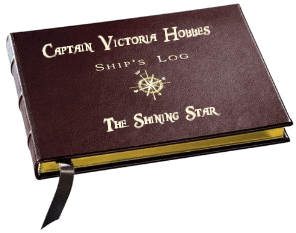 It’s a wet and rainy day here in the eastern worlds of the Pirate Spiral. With 5 knot winds and a chilly 62ºF.

Not a good day for sailing or being out on deck. So we’ve docked at Skull Island for a bit of rest. The ship is undergoing a few repairs from recent battles. And the crew has some much needed shore leave as well.

We’ve been traveling far and wide these past many moons. From Skull Island to the many skyways of Cool Ranch. While the crew is off the ship and it’s calm and quite, I’ve remained on board and decided to catch up with some paperwork. A Captain’s job is never done.

When last I wrote, the crew and I had just completed our missions in Valencia and we were making our way to Cool Ranch. A world of rough western birds and deadly creatures of all shapes and sizes. Oh and did I mention big! The skyways here are vast and beautiful.

We arrived in Cooper’s Roost Skyway and found our way to what appears to be the main town in this world. Cooper’s Roost has some pretty nice folk for the most part. And most of them have been pretty helpful in finding information related to our quest to find Marco Pollo’s map pieces. We located Merriweather Clark after we rescued him of course. But the map piece still alludes our travels.

We’ve also run into some very interesting characters that all needed some kind of help. Stolen items, lost items, kidnapped people and peace making. It has been an extremely profitable journey to say the least. Nearly everyone on the crew has some form of new attire or weapon. Including me! But the biggest and the best item I acquired was a new, sleek and extremely fast ship!

Let me introduce you to The Shining Star. 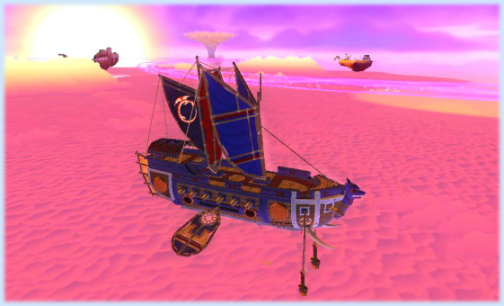 She is a grand ship, don’t you think? The crew and I truly love her. She’s fast, maneuverable and the best ship we’ve had in a fight. We’ve only been defeated twice since we’ve boarded her and taken to the skyways. Both times we were fighting against the Darkmoor Ships in Big Sky that protect Boot Hill. Those Duck of Death pirates are tough guys. 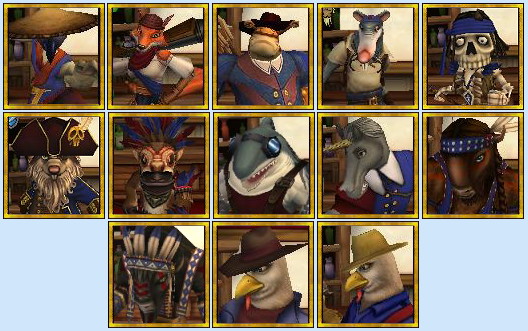 On top of the new crew mates, there have been some much deserved promotions as well. Fin has become my first mate and was promoted to a Level 25 Cutthroat Pirate. Bonnie was tired of the extra work and she had a hard time getting some of the crew to listen to her. She’s one of my best advisers and she sure seems a lot happier now.

Milo has been working hard as well. He turned us onto a great gold making venture and as a result Fin and I agreed to promote him to a Rat Rapscallion as a reward. Old Scratch got one of his ghostly callings from his old teacher and as a result he was promoted to an Undead Bokor. Louis has seriously improved his aim and he too was promoted, to a Crab Gunner.

We’re still battling in Cool Ranch. We captured 12 outlaws for Cogburn when he was sheriff in Cooper’s Roost. We headed off to the Santo Pollo Skyway and met the local hero, El Toro. Interesting masked bull he is. We ran into a lot of Banditoads and helped the local town folk there. Including defeating Santa Rana in the Governors Palace in Castillo Sapo.

We headed over to Big Sky and meet up with a some great Bison folk. Over in the Bison Village we came across the Shamans Flying Stag, Dancing Stars and Sun Dancer. They told us about a falling out between the Bison and their totem spirits. Seems one of their own, Three Scars found the Totem spirits: Brother Owl, Sister Snake, and Brother Wolf and betrayed them all for his own greed for power. Not smart. In order to get the Bison and Totem spirits to help us, we had to avenge each spirit and right the wrongs perpetrated by Three Scars.

Finally we got some of the information we came for. Where was the Duck of Death who we think has the piece of Marco Pollo’s missing map! It took a long time to get there, but found he had been transformed into a paranormal creature that required silver bullets to defeat. What a strange mission that was.

Thanks to Tonka we learned that Don Rafael the former El Toro has information about Captain Blood’s treasure. We’re hoping this finally leads us to the missing piece of the map. But he has asked us for a favor before he gives us the information we seek.  Cool Ranch is really a big big place.  And now we’re off to journey through Cool Ranch Part II.