As your Pirate works through the Gunn’s Gold quest in the Skull Island Skyway, you’ll be trying to catch Ratbeard who will become a member of your crew at the end of the quest.

You can visit our Companion Guide to find a list of all the companions available to each Pirate class within the game. Or return to our Epic Promotion guides for Pirate101 Companions.

As you level up your companions they will occasionally reach epic promotion opportunities. When you first meet Ratbeard he is a Rat Officer. Ratbeard’s second epic promotion occurs when he is promoted to Level 28 when, if successful, he will become a Rat Captain. You can learn much more about his abilities and skills from Pirate101 Central.

After you applied training points and he reaches this level, he’ll tell you he needs to speak with you. “Cap’n, I recon I know who killed me old crew. I’ll tell ye in a Tavern cellar. ” Head on over to the nearest tavern and find out what he’s figured out.

In the Tavern he’ll tell you, the Frog who made that Potion he used to knock out his crew is the only one who could have made it a poison. Then Ratbeard tells you he knows “just where I can find him. We needs to go to Port Regal.”

So obviously his quest will require you to have access to Port Regal.

Port Regal Skyway
When you gain access to Port Regal, head to the main port town itself. 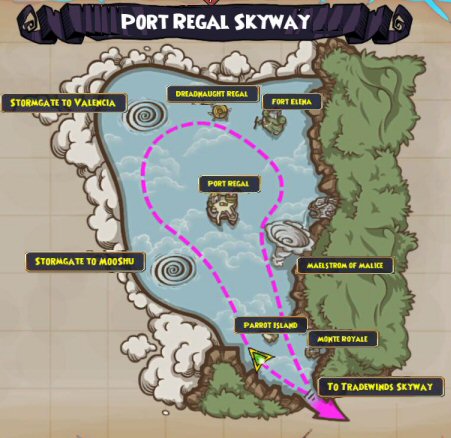 Once you dock, find The Hope and Anchor Tavern. There Ratbeard will catch up with an old friend, a Frog named Mr. Flinch who will be on the main floor. No need to go downstairs.

Flinch will tell Ratbeard that “It was Captain Fowl! He knew if word got out you’d poisoned your crew there wasn’t a garbage scow in Skull Island that’d have you.”

You will learn that Ratbeard and Captain Fowl have crossed paths before and there were some serious scores to settle! Flinch tells you all that if you go to the Reston Warehouse, you might find Fowl’s crew who has been seen coming and going from that place.

The warehouse is on the other side of Port Regal and you’ll be looking for Lorch.

Now Lorch will tell you that Fowl has already gone into the sewers to meet an important customer. Too bad for you. So of course Ratbeard says “to the sewers”.  You’re off again to the Storm Drains where you’ll have your first battle in this quest. A bunch of Crab Crawlies and one of Fowl’s henchmen. Once you defeat them, you’ll be off again. This time to see Catbeard on the Catspaw.

When you catch up with Catbeard he gloats a little about “The great and terrible Ratbeard, coming to me hat in hand. This is simply delicious!” He doesn’t care much for Captain Fowl either. So if you do him a favor, he’ll help you catch Fowl.

Pick up the supplies and head on back to the Catspaw. And..try to ignore the ribbing that One-Eyed Jack gives Ratbeard over “working with” Catbeard.

Back in the Cat Cave, Catbeard tells you that Fowl is cunning and you’ll never find him. The way to catch that Captain is to get him to come to you.

He’ll tell you “The Gobbler’s down in the Mysterious Tunnels, under Scurvy Dog Hideout. Find it, and spread the word. Fowl will find you. Give him my regards.” So now you’re off to the Tradewinds Skyway and Scurvy Dog Hideout to find the Temple of Death.

Down in the temple you’ll find a set of doors that can’t be opened. You’ll have to defeat Aztecosaur Mummy to collect some amulets that will help you open the doors. Once you’ve unlocked the Chamber doors, you’ll have to defeat an Aztecosaur Blood Lord in the Ancient Shrine in order to take the Golden Gobbler. Dispatch with them, grab the statue and head on back to Port Regal.

Back at The Hope and Anchor Tavern, talk to Mr. Flinch again. Of course he’ll be surprised to see you and even more surprised you found the Golden Gobbler. At this point you learn that Ratbeard grew up here in Port Regal and he has a plan to attract Captain Fowl into a trap. Follow him down into the storm drains. As soon as you put the Gobbler on a box, Fowl will show up. You’ll battle his henchmen and then he’ll join in the fight near the end.  Once he’s defeated he’ll surrender and Ratbeard might surprise you with his revenge.

And with that, Lasko shows up.

Now take Captain Fowl to Governor Stanley. He’ll take the Turkey off your hands and ask you if it’s true that you and the crew found the Golden Gobbler? And of course he’ll be more than happy to buy it off your hands for a handsome price! Woohoo Captain, it’s time to head to the Tavern to celebrate.

Ratbeard thanks you for your help and admits that doing the right thing didn’t hurt at all. Of course he won’t be making a habit of it though. Har Har. With that, Ratbeard will be promoted to a Rat Captain. Congratulations! 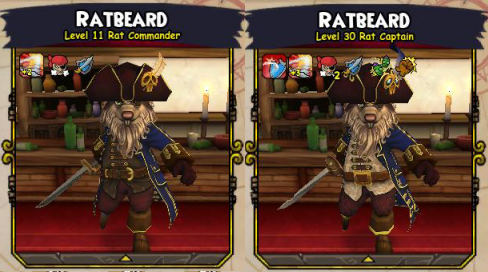 Epic Promotion Number Three:
Ratbeard’s next promotion will occur when he reaches level 55 and promotes to a Rat Admiral. My Ratbeard has a bit farther to go before he reaches that level. But as soon as he does, I’ll update his Quest page.