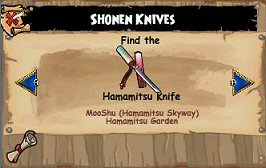 I love MooShu, it’s one of the prettiest worlds in all the Spiral. And of course you’ll find another Zeke Quests to keep you busy exploring the many areas of this world.

When you first arrive in MooShu you’ll be sent straight to this world’s main city, Hamamitsu. Once you dock, leave your ship and head through the city gate. On the far side of the island, you’ll see a large gazebo beyond the garden dragon. Standing outside the building, you’ll find Zeke. He has another quest for you to find some missing items.

This time he’ll tell you about the deal he had with Lord Shonen for some knives. But they’ve gotten lost. As usual, Zeke will give you a nice reward for your help once you have located them all.

As with most Zeke items, you must complete certain tasks in some areas in order to be given a quest to enter another area where you can hunt down the next knife. So don’t think you can get the quest from Zeke and then set off to find all 19 the knives. Yes, 19, wholly cow!

Below are the locations of the knives and a map for the area they’re in. Look for the X on the map. Well of course it’s an X, how else would you Mark The Spot for treasure in a Pirate world?

Hamamitsu Garden
After you’ve talked to Zeke, you’re ready to find the first set of knives, right here in Hamamitsu Garden. Turn from Zeke and face the arched bridge. You’ll see a blue building on the left and a garden area on the right. Cross the bridge, pass the first two paths on the right, and then turn down the third path on the right. Along the road, you’ll see a square well. Next to the well, on the far side, you’ll find the first set of Shonen Knives. Now you know what to look for.

Rokugara Island
In Hamamitsu you’ll be given a quest to visit the Yakooza on Rokugara. There are two knives here, one in the village and one in Yakooza cave. First up, the village knife.  Follow the path through the village. Pass the row of houses that will be on your left. Behind these houses you’ll see a dock. The knives on near the far edge of the dock.

Yakooza Cave
Now you’re ready for the Yakooza. Once you enter the cave, you’ll talk to some guys who are standing in front of a wrecked ship.  Run around to the back of the ship, and you’ll find the knives. Along with a nice chest you can pick up while you’re there. 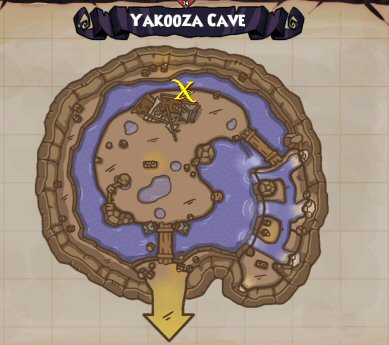 From here on out, the quests you choose to complete next are up to you. There’s no set consecutive order to finding the knives. So when you go to a new area, check to see if you should be looking for knives. Most of Zeke’s quest will tell you which dock a set of knives will be located. When you’re at the Icy Dock, check your quests to see how many knives you’ll be looking for while you’re at this dock.

Yagizawa Village
Pass through the dock gate into the village.  Follow the path on the right side, until you reach the first right. Stay on the grass and run around the next corner to stay up on the hill over the path. You’ll run behind a small house, where you’ll find the knives sitting on the far side.

Sujimura Villiage
When arrive in Sujimura, you’ll see a large statue flanked by two paths that head up a set of stairs. Take either path up the steps. Directly in front of you is a large building with a green roof. It’s the largest building in the village, so you can’t miss it. Run behind the building and sitting on top of the stone deck, you’ll find the knives. You’ll be able to stand next to the knives, instead of the usual position of standing over the knives.

Moomori Clanhold Compound
In the center of the compound is a lovely garden area, with a nice water feature. Near the tree, you’ll find the knives sitting next to a set of mushrooms. 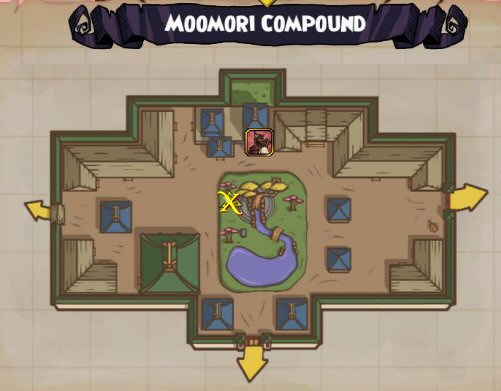 Khotan
This is another dungeon area, so make sure you find the knives before you leave.  You’ll receive a mission to destroy the armory, which is on the small island to the right. To the left of the armory is a tree, and the knives are laying next to it. They sit on the backside of the island, next to the tree. 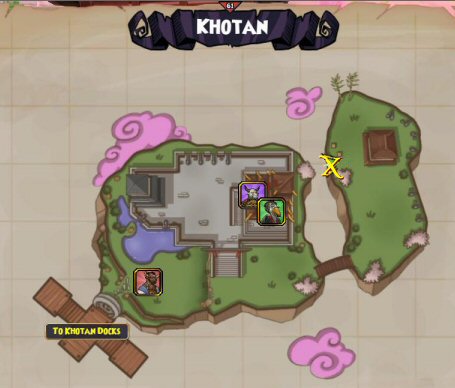 Subata Temple
This is one of my favorite places in the Subata Skyway. I love snow. So once you pass through the dock gate, run straight ahead and you’ll see a split in the path. To the left, you’ll see a bridge, to the right you’ll see a path leading down the hill. Head down the hill and stay to the right down the path  to where the vendors are in the red gazebo. You’ll see a path on the left of the vendors that continues down the hill, head that way. It’s a long path that goes through a tunnel and ends where a prisoner is being held in a cage. The knives are just to the left from the tunnel exit, and before the caged prisoner. 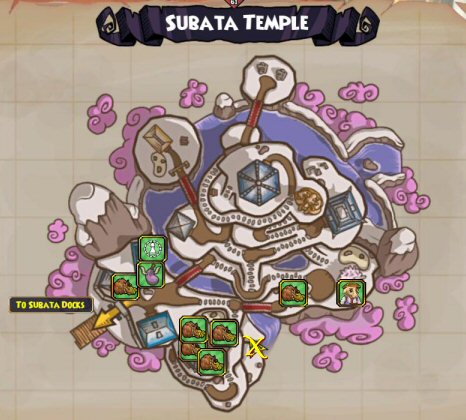 Temple of the South Wind
If you stay to the edges of the path, you can miss getting into a fight on your way to find the knives. Once you pass through the dock gate, take a left. Follow the outer cliff wall to the broken arch way. You’ll find the knives laying between the standing pillar and the piece that has fallen on the ground.

Lake of the Rising Sun
As you run toward the lake you’ll come to a T-intersection. Take the left up the hill to the ravaged village. You’ll find Shi Chan standing before a broken Moodah. You should see the Moodah’s head lying on the ground. Move to Shi Chan’s left, and you’ll find the knives tucked beside the statue. 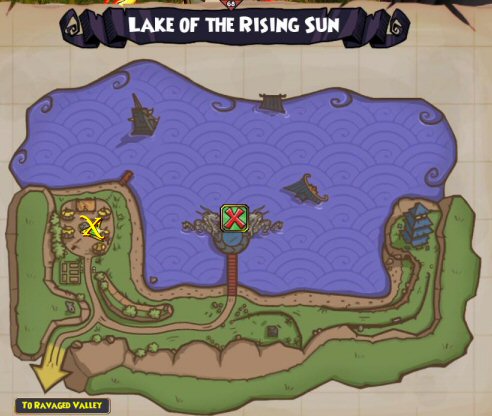 Ashen Roads
Pass through the dock gate and run in the grass on the right side. You’ll need to run all the way through this area, until you reach what used to be the village. Cross through the village to the far side and you’ll find a long red building near the fence. The knives are laying on the left side of the building, near the back corner. 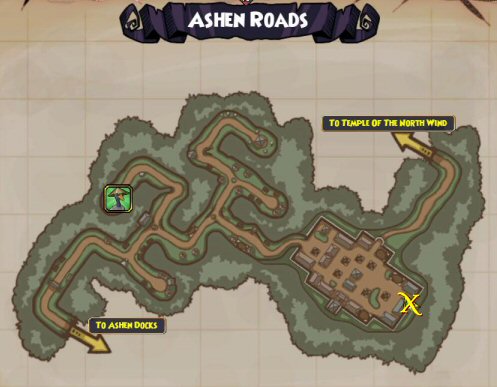 Temple of the North Wind
Make your way through the temple and down the back stairs. At the bottom of the stairs, you’ll see a path going to the right. Follow that to the stone wall. On the right side of the wall, near a stone lantern, you’ll find the knives tucked in between the wall and the light.

Raven Island
Find the snowy path that takes you to the top of the frozen ponds. The knives are sitting on the far side of the top pond, to the right. You’ll find it next to the edge of the cliff.

The Paths of Penance
Once you pass through the dock gate, take your first left and follow the path to the square temple looking area. In the center of the square, you’ll find a red gazebo where all the paths run through it. Enter the gazebo and turn left down the path. At the end of this path you’ll see a frozen pond. On the far side of this pond, you’ll find the knives.

Corrupted Shrine
After you pass through the dock gate, you’ll run along the path to the first intersection. In the middle of the road is a broken Moodah. Directly behind the stone platform, laying in the grass, you’ll find the knives.

Temple of the East Wind
When you enter the Temple area from the Corrupted Shrine, you should see a long covered bridge to the right. Cross the bridge to the temple deck. Take a right and go around the corner to the side of the temple. You’ll see a set of stairs doing down to a lower deck area, head down there. You’ll find the knives laying on the left side of the deck, near the open area to the lake below.

Good Luck or Congratulations on Finding All The Shoshen Knives!