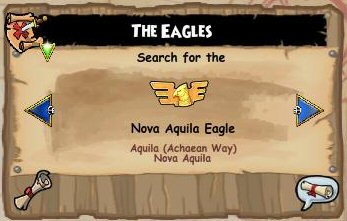 Welcome to Aquila and the Achaean Way. The home of heroes and mythological beasts. Your first quest into this new world will send you to Nova Aquila. It’s a beautiful place with a vast array of art and music. Don’t you just love the big statues hovering over the dock and village?

Like most of the worlds, you’ll find Zeke has traveled here on another business venture. From the dock, run through the dock door (it doesn’t matter which one) and up the hill to the village. In the center of the isle, you’ll see a large pool outside the stone arches. Run around the pool and you’ll find Zeke standing near the cliff edge

He’ll tell you about his business deal with Dueling Dalton, who wants to establish the Hotel Aquila in Cool Ranch. Mr. Dalton would like some authentic decor for his hotel and he’s sent Zeke to find the Aquilan Eagles.

As with most Zeke Quests, you must complete certain tasks in some areas in order to be given a quest to enter another area where you can hunt down the next eagle. So don’t think you can get the quest from Zeke and then just set off to find them. And you don’t want to have to repeat a dungeon, just to get to the stone.

Below are the locations of the kings and a map for the area they’re in. Look for the X on the map. Well of course it’s an X, how else would you Mark The Spot for treasure in a Pirate world?

Finding The Aquila Eagles
You’ll have 10 Aquilan Eagles to find, but The Eagles aren’t hard to miss. They’re a decent size and shiny gold. So if you know what to look for, you shouldn’t have a problem searching them out. Even though a few are hidden behind statues.

Nova Aquila
Once you have the quest, you’re ready to find the first Eagle. It’s an easy one and will help you learn what it is you’re looking for on the other islands. From Zeke follow the roadway to the right. You’ll find the Tavern outside the arches. The first building inside the arches, on the right is the public bath. The Eagle is laying on the stone floor, to the left of the entrance between the two columns. 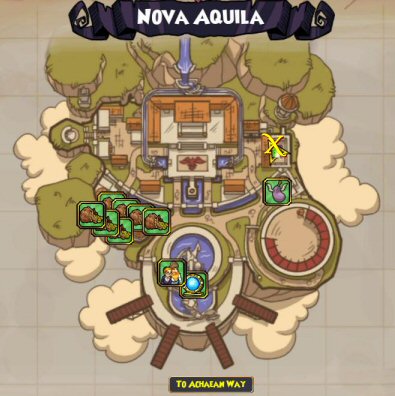 Delphos
Once you arrive at the island, run straight off the dock to the large statue directly in front of you. The Eagle is laying behind the base. 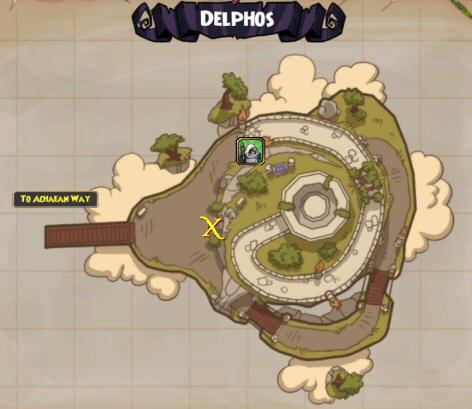 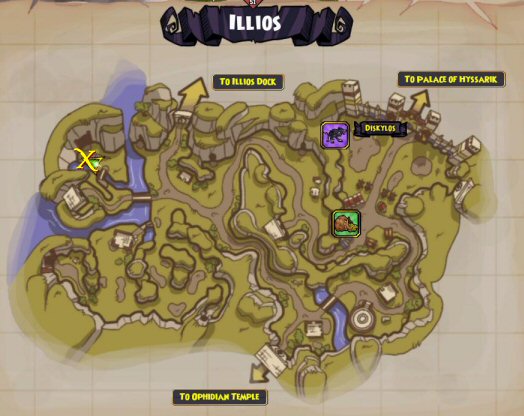 Knossos
Pass through the dock gate and follow the path up hills to the 3rd level of the grounds. You’ll see a hardened lava flow on the right, As soon as you enter the 3rd level, run along the edge of the field to the right, past the tree. Run over to the cliff, where you’ll see a fallen temple ruin. Go behind the fallen column and you’ll see the Eagle laying on the stone floor near the cliff wall. 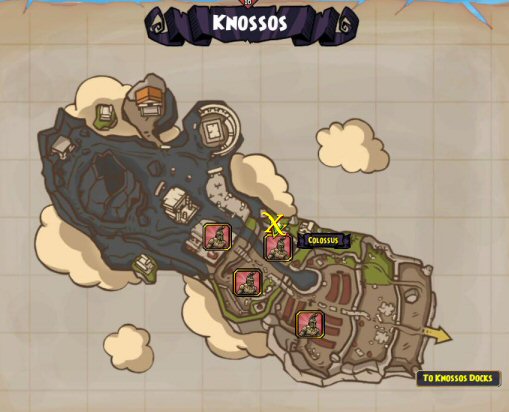 Achaea
If you follow the quests in Achaea, it will take a while to receive the one to Magnesia where you’ll find the Centaurs. Once you enter Magnesia, turn left and run along the cliff wall to the ruins at the end of the field. There are two destroyed buildings here. One with walls, and the other with only columns remaining. The Eagle is sitting next to the second ruin, by the right rear column. 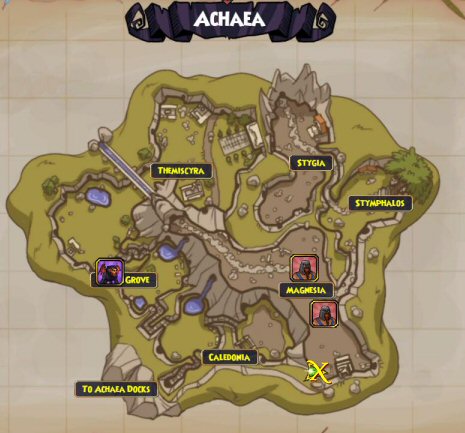 Unoculum
The island home of Argo. From the dock, head up the stairs all the way to the top. When you reach the front door of Argo’s house, continue to the right to the edge of the island. Turn left to go behind the mountain wall. There you’ll find the Eagle laying in the grass, next to the mountain cliff. 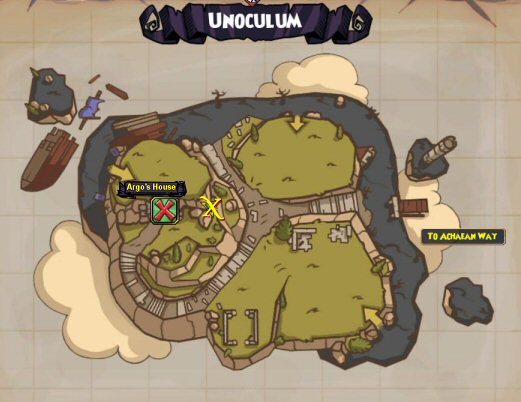 Talos
When you leave the dock, you’ll have to get through the gate into Talos through a sigil. Run to the steps where you’ll talk to Hawkules. Continue around the Temple to the tall cliff. On the left side, you’ll see another cliff alcove where you’ll find the Eagle, laying in the grass. 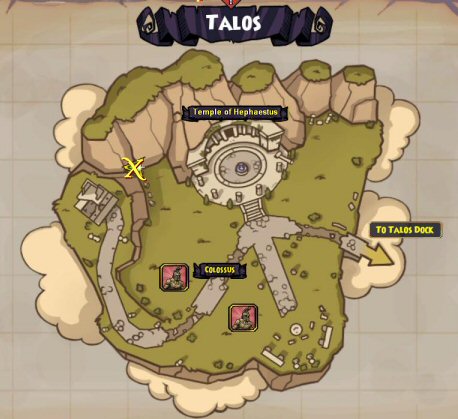 Anthemusa
When you dock, you’ll be sent across the bridge and to the left where you’ll speak to the Sirens. After that, continue to the left and run past their pool. You’ll come to a small area where a round gazebo rests on the right. Run through the gazebo to the back and you’ll find the Eagle laying in the grass in a small alcove of the cliff. 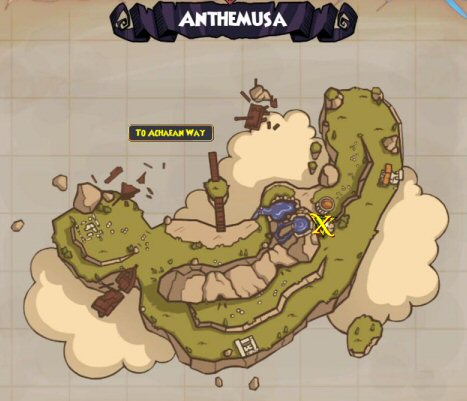 Laestrygon
Go through the dock door and across the rope bridge.  Follow the path to cross the second and third rope bridges. You should now be on the far island of Laestrygon.  Run between the two battlefields where the Ettins and Trolls are. Toward the back you’ll see a small wooden bridge that leads to a large rock by the cliff. Behind the rock you’ll find the Eagle. 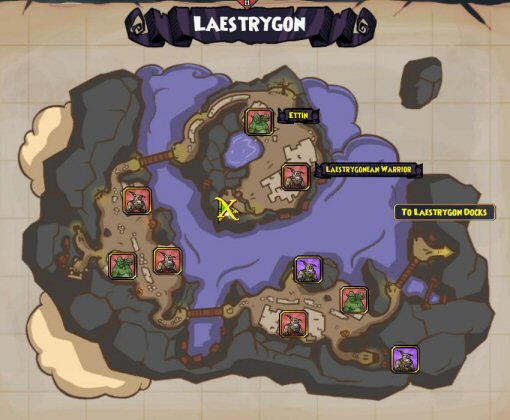 Ithaca
One of the last areas you’ll be sent to in Aquila is Ithaca. It’s a pleasant estate. When you run through the dock gate, you’ll enter a garden square. To the rear of the first level of the grounds is a large building with stairs running all around the building. You’ll find the Eagle, laying on the grass, next to the stairs behind the building. 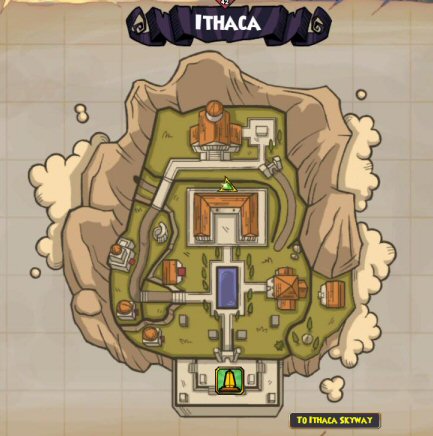 Good Luck or Congratulations For Finding All The Eagles!