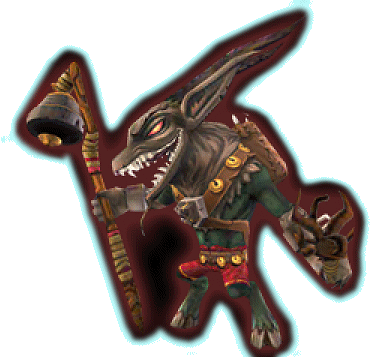 The Battle of Krampus & The Gold Key

Use your Skeleton Keys to venture into the Krampusgarten and confront the horned demon, Krampus, before he comes wriggling down the chimney to ruin Yuletide on Skull Island!

Krampus came to the Pirate Skyway during the KI Yuletide season of 2018. His Lobby appeared in a giant Yuletide Present on Skull Island, located near Avery’s personal dock.

Entry into the Krampusgarten Lobby is achieved through a sigil. These battles are intended to be difficult, and there are three levels of difficulty inside. So Pirates at various levels, have a chance to defeat Krampus. This isn’t only for the top-level Pirate Captains.

When you first enter the Lobby, you’re greeted by a lovely holiday room, decorated for a beautiful feast that welcomes you and your crew. The room is quickly overcome by a haunting darkness that transforms the festive setting into a dark and ominous atmosphere.

To the left behind the long dining table, you’ll find three flaming fireplaces. Each one locked and requiring a Skeleton Key to gain entry. 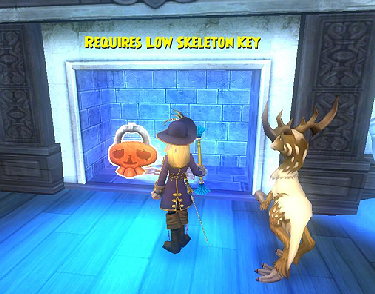 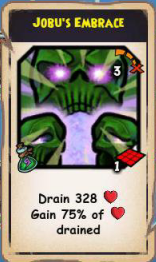 Behind each fireplace is a haunted woodland, where you great Krampus and his hoard of minions.

Krampus has one of the soul reaver spells, so watchout for his attacks during the battle. Only on the low-level can you defeat him early in the battle. But if you don’t kill him, he’ll use his Jubu’s Embrace to recover his lost life.

The Wood Key Krampus
The Low woodland contains a Level 8 Krampus. Where his minions range from level 7 to 8.  We defeated Krampus in the first round of battle. So it appears he is not immune at this level.

The Stone Key Krampus
The Medium woodland contains a Level 34 Krampus.  Where his minions range from level 32 to 34. Like all Nightmare battles, Krampus will remain immune to your attacks, until his minions have been destroyed.

The Gold Key Krampus
The High woodland contains a Level 75 Krampus. Where his minions range from 74 to 75. Again,  Krampus will remain immune to your attacks, until his minions have been destroyed.

A Present For You – Watch Out!
In the Medium and High woodlands, Krampus also has the ability to turn you into a Present if you attack him! So watch out! You’ll be a present for 3 rounds of combat! You can also be damaged while you’re a present too. You can’t be healed in this state either.

Later in the battle, Krampus can turn everyone into a present, and you don’t even have to hit him. Thankfully, this version of the “Gift for you” only lasts 1 round.

After The Fight
Check your badges! For each of the Krampus battles you’ll be given a “Collection Badge”. If you’ve never seen the collection badges before, these are badges you win after you’ve defeated an enemy for a certain number of times.

Into the Woods
Behind Krampus into the woods, is a path that goes left to right. It’s not easy finding the path through the trees, but if you look in the middle, you’ll see a leafless bush that you can walk through. Just inside, turn left to the rock, then right and you can walk through the snow-covered pine trees. Make sure you look at the surrounding area before you start walking on the path, so you know how to get back out! The path goes left to right and at the end of each path is a small circular clearing. So far, we’ve not found anything on this path. No chests, no gifts, no surprises.

That’s it so far. Good luck and happy yuletide!