Out in the real world, Dad is an Evil Wordsmith who spins words so vile they dare not be put on paper. Yeah yeah, all bark. He’s a Bard who likes to tell funny and frightful tales. And he’s pretty good at it actually. Though his tales are not for kids! He’s also a business man and owns his own Fire Protection Sprinkler company. If you look up over your head and see a sprinkler, he’s the kind of guy who designed the installation and managed the construction that built the system.

He has watched us play Wizard for years and now Pirate. He’s not much on the Wizarding world, but the Pirate world has intrigued him and today when received our mail and discovered Marco Pollo’s map, we had two extra codes to use for our free gift from KI. Before we simply gave them away, we asked Daddy if he wanted to become a member of Pirate and use one of the codes for his own pirate. We were both pleasantly surprised when he said, yeah sure. Yeah!

Captain Garrett’s Story
Garrett’s parents were said to have been Mutineers. You can’t trust a pirate! He was raised in Skull Island, bouncing around from Skull Island itself to Jonah Island where he learned the skills of a privateer from the well connected Frogfather.

His ship colors are: Yellow and Blue

His ships flag is a bloody red Jolly Roger clinching a black rose in his gnarly teeth. On a field of blue, marked by a yellow X. Well of course he picked an X, it marks the spot for treasure and gold doesn’t it?

Watch out for this wicked and evil pirate. He will make you deal that you can’t refuse and he has no qualms about double crossing his best friend. No matter who that is at the moment. As most privateers are grand leaders, they also make no deal that doesn’t give them the edge and bigger profit. All while making you think it was totally your idea.

Current Adventures
Garrett is currently a level 16 Privateer. He is currently Pirating in Monquista with his first mate, Egg Pao. Keep up to date with his adventures through the Captian’s Log.

Accomplishments:
Through his travels through out the Pirate spiral he has picked up a few talents along the way. Currently he has gathered a few badges, but he’s most proud of these:

His Companions:
He has made alliances with several folk through the spiral. 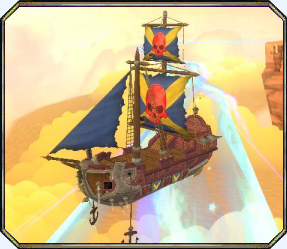 The Rusty Rover
A Light Skiff

His ships:
Garrett’s ships will be sleek and mean, so watch out for them in the Pirate skyways!

His Pets:
Companions are great to have in a fight. But having a favored pet to snuggle with, is also good to have. Garrett is pleased to have the following pets with him:

His Mounts:
Garrett is proud to have the following mounts:

Home:
He has plans for two homes, one for business and one for escape and relaxation.

Garrett’s Progression Through Training and Experience: