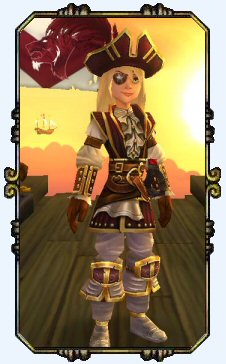 Victoria is my first character in the public edition of Pirate101. She’s a combination of the best parts of all my beta swashbuckler pirates. There were 4 in total. She’s technically the 5th. So she’s been my favorite character from the beginning when we were honored with a closed Beta Key.

Victoria was born October 8th, 2012 @ approximately 10:05am eastern U.S.A. 5 minutes after Pirate101 went live with their full edition for the Head Start Week. It was a very exciting moment to know you’re one of the first players into the game as it rolled out to the public.

There was no doubt that she would be the first character I created in the game. I’m going to miss her predecessors. But at least this incarnation of Victoria Bristol won’t be deleted in testing upgrades. This one is here to stay!

Victoria’s Story:
Victoria’s parents are said to have been lost in a shipwreck. Victims of a great storm in the skyways. Orphaned, she was raised in the quiet land of Mooshu. There she learned the skill of sword, knife and battle with her trusted friend and guardian Subodai!

Her ship’s colors are Burgundy (dark red) and white.

Her pirate signature flag is the wise wolf.
He honors her love of the wolf with his strength and cunning in battle. He’s loyal and dedicated to the pack, similar to how she feels for her crew. Well most of them anyway. Victoria has a tendency to howl at the moon on a bright full moon night. So what better image than the wolf to represent her ship and crew.

While we’re waiting for the next release of Pirate101, we’re working on Captain badges. There’s a lot to do to acquire those precious badges.