If you’re new to KingsIsle games (Wizard101 and Pirate101) you’re in for some great fun. These games are wonderful for all ages and for every member of the family. Players of the original KI game Wizard101 are familiar with the little extras in these games. But if you’re new, there maybe some things you don’t know that can enhance your game play.

For instance, did you know you can take a picture of your Wizard or Character from a frontal view and using the F12 key? Or that there are hidden treasure chests all over the Spiral to find some goodies in? END_OF_DOCUMENT_TOKEN_TO_BE_REPLACED 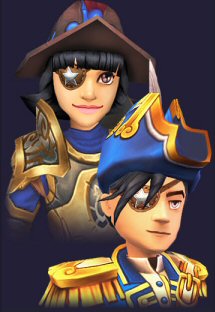 A Special Message From One-Eyed Jack

Pirate101 Beta ends this Saturday, October 6th, 2012 at 5:00pm US Central. The game will remain offline until the morning of October 8th, 2012, which is when Pirate101 begins its Head Start week for those who qualify. (All Beta players qualify for the Head Start week–See you Monday!)

That means all characters and their progress will be wiped over the weekend. I hoped the wipe would take place today and the original Beta testers would be allowed back into the game Saturday morning for 2 days of play before the world gets involved. But it looks like they’re not going to be able to do that.

You can read the entire message on Jack’s Captain’s Log.

But not all is lost! In consolation check out the other messages from today. It appears this is one of the gifts KI will be giving to say thank you. So if you’ve been a Beta Tester (either through Beta Key or Boochbeard Bundle) you will receive a special Gift from Pirate101. END_OF_DOCUMENT_TOKEN_TO_BE_REPLACED